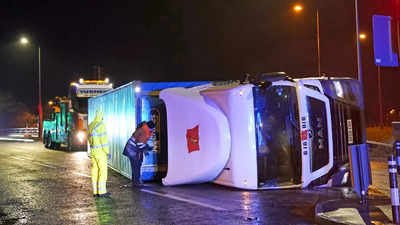 Two people were killed, thousands of homes cut off power and drivers were trapped on frozen roads overnight when a powerful storm hit the north of the UK, authorities said on Saturday.

A man was killed when his car was struck by a falling tree in Northern Ireland on Friday night, police said, when “Storm Arwen” triggered a rare “red weather” warning from the UK weather service.

Another man was killed when he was struck by a tree in the Lake District in north-west England.

“People should stay off shore as waves and debris are life-threatening,” warned the Met Office.

With wind gusts of nearly 100 miles per hour, the strong gale caused power outages for more than 55,000 customers in the north of England, the region’s power company said.

Express train services were suspended north of Newcastle and roads were closed due to fallen debris in parts of Scotland, while snowfall on Friday afternoon led to more widespread disruptions to routes.

Snow and fallen trees caused roadblocks in northern England and Scotland, forcing many drivers to sleep in their vehicles overnight, according to traffic police and social media.

About 120 trucks were “stuck in the snow” on a section of the motorway between Manchester and Leeds in northern England, police said, tweeting images of the road covered in white before the snowplows could be deployed.

While the winds had subsided by Saturday morning, the Met Office warned that conditions would remain challenging due to ice and snow, and the public was urged to avoid nonessential travel.