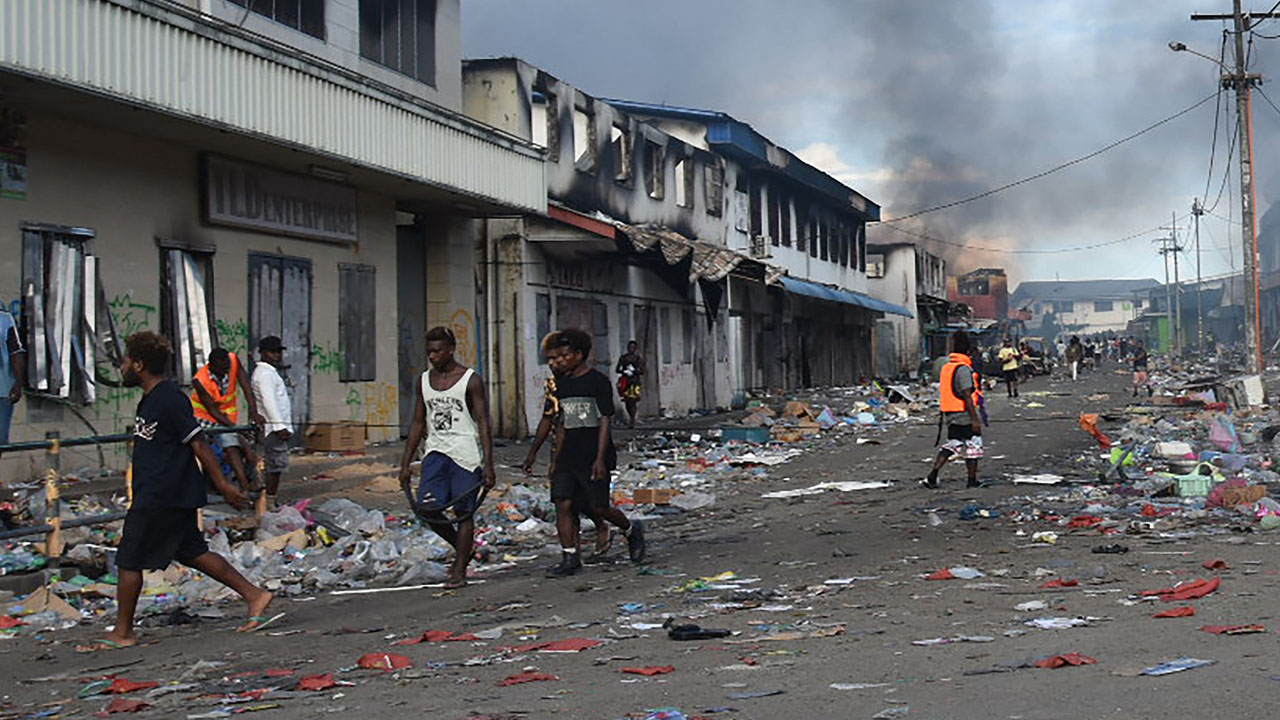 The night curfew took effect on Friday in the troubled Solomon Islands capital Honiara after a third day of violence in which the prime minister’s home was attacked and swaths of the city reduced to smoking ruins.

Police fired warning shots and tear gas to disperse rioters who marched towards the home of besieged leader Manasseh Sogavare in the east of the generally sleepy coastal capital.

The mob set fire to at least one nearby building before being driven back to the city center, AFP reporters witnessed.

As it rained in the early afternoon, local authorities mobilized to quell the embers of violence and declared a nightly curfew in Honiara that will remain in force “until it is revoked.”

The mobs had ignored a previous 36-hour shutdown, with thousands of people, some brandishing axes and knives, roaming Chinatown, Point Cruz and the city’s business districts, according to AFP correspondents on the spot.

The explosion of violence is in part the result of frustrations with the Sogavare government and chronic unemployment, compounded by a two-year pandemic.

“Most people get just one meal a day, there are no tourists and there is very little economic stimulus,” Douglas Kelson, director of the St John Ambulance Service, told AFP.

“People do things they wouldn’t normally do when they’re hungry,” Kelson said, though he had seen very few injuries.

‘Living in fear’
After three days of chaos, large areas of the capital were burned by flames, even if the rioters lit fewer flames than in previous days.

The shells of a charred black building lined a street scarred by fire and three cremated trucks were stranded on the road as the youths passed.

“At this time it is very difficult … children will be lost from schools, many mothers will be unemployed.”

Many of those on the streets lived in informal settlements near Chinatown and had been drinking alcohol, Manuri said.

In Chinatown itself, a department store caught fire on Friday, setting off an explosion that sent dozens of people fleeing in panic.

A tobacco warehouse was also set ablaze as smoke from the fires of earlier days threw parts of the devastated city of 80,000 people into acrid haze.

The overrun Solomon Islands Police Force said it had made only two arrests, even though two police stations are among the many buildings set on fire.

‘On knees’
The approximately 100 Australian peacekeepers arrived overnight, just hours after Sogavare called out for urgent help from neighbors.

In a letter obtained by AFP, Sogavare told his Papua New Guinea counterpart James Marape that “certain elements” had “attempted to overthrow a democratically elected government” and called for peacekeepers to be dispatched for a “period of three to four weeks “.

In an address to the nation, Sogavare told citizens that the Solomon Islands had been “brought to its knees” by the unrest, but vowed to resist calls for his resignation.

The pro-Beijing leader claimed that foreign powers opposing his 2019 decision to shift the Solomon Islands’ diplomatic allegiance from Taiwan to China were behind the unrest.

Experts say the crisis has also been fueled by long-standing animosity between residents of the most populous island of Malaita and the central government based on the island of Guadalcanal.

The archipelago nation of around 700,000 has endured ethnic and political tensions for decades.

Malaita residents have long complained that their island is neglected by the central government, and divisions intensified when Sogavare recognized Beijing in 2019.

On Friday, the Chinese government condemned the violence and vowed to “safeguard the security and legitimate rights and interests of Chinese citizens and institutions.”