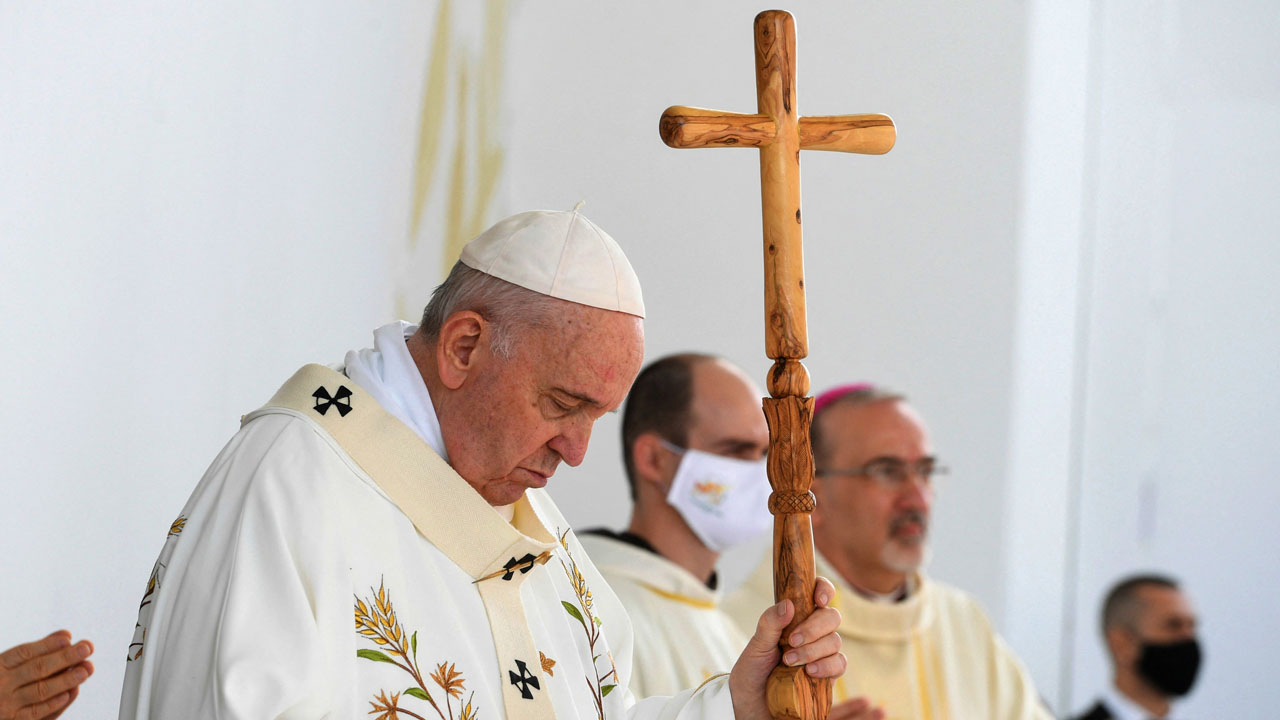 Pope Francis called for a “sense of brotherhood” at an open-air mass in Cyprus on Friday, the second day of a visit to the divided Mediterranean island that has largely focused on the plight of migrants.

As a gesture of solidarity with those fleeing poverty and conflict, the 84-year-old pontiff was expected to offer 50 immigrants now in Cyprus the chance for a new life in Italy.

The pope delivered his open-air mass at Nicosia’s main football stadium to some 7,000 worshipers, many of them workers from the Philippines and South Asia, who make up a large proportion of the 25,000 primarily Greek-Orthodox Catholics in Cyprus.

“Faced with our own inner darkness and the challenges that we have before us in the church and in society, we are called to renew our sense of brotherhood,” Francis told them.

“If we remain divided, if each person thinks only of himself, or of his group, if we refuse to remain united, if we do not dialogue and walk together, we will never be completely cured of our blindness.”

Many in the crowd waved the flags of nearby Lebanon, the Philippines and the pope’s native Argentina. A 130-member multicultural choir sang songs in Arabic, English and Greek.

“We are very lucky,” said 31-year-old Jackylyn Fo Bulado, a domestic worker from the Philippines who wore a T-shirt with the Pope’s image, said before Mass began.

“We are waiting for a simple message of love and peace from the Pope and that he will bless Cyprus and the world.”

‘Dialog message’
The Pope previously visited the Holy Archbishopric of the Greek Orthodox Church of Cyprus in Nicosia, seeking to improve the historically difficult relations between the Roman Catholic and Greek Orthodox churches.

“When it comes to our relationships, history has opened wide furrows between us, but the Holy Spirit wishes that with humility and respect we draw closer once more,” he said in an address to Orthodox clergy, including Archbishop Chrysostom II. from Cyprus. .

Elena Chentsova, an Orthodox Christian originally from Ukraine, said she woke up early to see the pope.

“I am Orthodox and I hope that he will spread a message of dialogue between the different religions, to be even closer,” the 42-year-old told AFP.

Francis, on his 35th international trip since becoming pope in 2013, is the second Catholic pontiff to visit Cyprus after Benedict XVI did in 2010. He travels to Greece on Saturday morning.

Cyprus said it had deployed 500 police officers to secure the pontiff’s visit, with pointed shooters deployed on rooftops and a helicopter whizzing through the sky.

Police said a 43-year-old man was arrested after a security check at the stadium when a knife was found in his possession. A police spokesman said the knife was believed to “have nothing to do with the Pope” and was for personal use.

Later, the Pope will conduct an ecumenical prayer service with migrants from dozens of nations at the Church of the Holy Cross of Nicosia, located near the UN-patrolled “Green Line” that divides the country.

Cyprus has been divided since 1974 when Turkish forces invaded and occupied the northern third of the island in response to a military coup sponsored by the Greek junta in power at the time.

Only Ankara recognizes the self-proclaimed Turkish Republic of Northern Cyprus, and tensions simmer between the two sides.

‘Walls of fear’
The mostly Greek south accuses the north of sending migrants across the Green Line and also says it now receives the largest number of first-time asylum seekers from any EU member country.

On Thursday, Francis lamented “the terrible laceration” of Cyprus and also urged greater unity in Europe, rather than nationalism and “walls of fear” as the continent faces an influx of refugees and migrants.

The island experience served as a reminder to Europe, he said, that “we have to work together to build a future worthy of humanity, overcome divisions, tear down walls, dream and work for unity.”

On Thursday night, Francisco visited President Nicos Anastasiades to discuss the painful division of the island.

“I think of the deep suffering of all those people who cannot return to their homes and places of worship,” the Pope said, urging dialogue.

Turkish Cypriot leader Ersin Tatar accused the south of trying to use the trip to score “political goals against Turkey and the Turkish Republic of Northern Cyprus.”

It was a “source of pain for us that Pope Francis only visits Greek Cyprus,” he said.

“There are two towns in Cyprus. Not only Greek Christians live in Cyprus, but also Turkish Muslims. This is one of the basic realities of Cyprus ”.