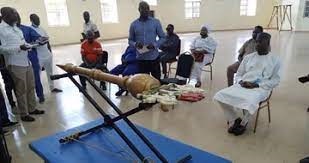 Eight members of the 24-member legislature claimed to have dismissed Mr. Ayuba on Thursday at 6 a.m. and replaced him with Yakubu Sanda (APC, Pengana Constituency).

Philip Dasun, Majority MP (APC, South Pankshin) at the 14-member session present, moved the motion to suspend six of the eight members who carried out what he called unlawful dismissal.

Mr. Dasun said that the Constitution of the Federal Republic of Nigeria, section 92, paragraph 2C, had a clear procedure on how to remove a speaker or vice-president.

The deputy majority leader, who is also the chairman of the House information and communications committee, said none of the procedures were followed by members who allegedly removed the speaker.

He said members did not form a quorum to sit and they did not have the two-thirds majority required by law to remove a speaker.

“They violated article 92 (2c) of the Constitution of the Federal Republic of Nigeria and article 7 of rule 14 of the Standing Orders of the Plateau State Assembly.

“I therefore propose that the six members who committed the illegality be suspended until further notice.

Dasun also proposed a confidence vote motion to pass for Abok Ayuba as the authentic president of the 9th Plateau State House Assembly.

He challenged those who claimed to have collected 16 signatures required by law to impeach the speaker from making the document public.

The motion was again seconded by Gyendeng affirming lawmakers’ support for Ayuba.

Mr. Ayuba, speaking with reporters after the session, said they stood up for the people of the Plateau and for the truth.