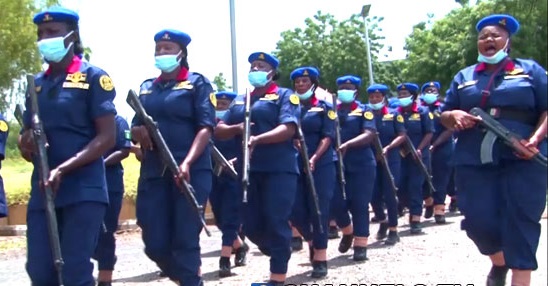 The Nigerian Civil Defense and Security Corps, NSCDC, has vowed to rid the nation’s schools from kidnapping students and teachers for ransom.

NSCDC Commander General Abubakar Audi said this Tuesday during the inauguration of the Women’s Special Squadron, SFS, and Rapid Response Squadron, RRS, of the Ondo State Command in Akure.

Audi, who was represented by Adeyinka Ayinla, Zone J Zone Commander, NSCDC, explained that the command had made efforts to rejuvenate its staff for more effective service delivery.

He said the spate of attacks by criminals involved in kidnapping students for ransom had made it imperative to focus attention on tightening security in schools.

He said that a special women’s squad had been formed as a proactive measure to ensure safety and restore the trust of students, parents, teachers and the community in the country’s security architecture.

“The task force must face these emerging security challenges in the country and curb the constant threat to learning posed by reckless criminals who have been declared terrorists.

“The female squad is a necessarily born child of the need to effectively reduce the recent increase in insecurity due to armed banditry, kidnapping and insurgency.

“It fits the need to effectively implement the safe schools initiative proposed by the government.

“You will agree with me that our country currently faces unprecedented security challenges and that unique problems demand unique solutions,” said Audi.

Therefore, he commissioned the women’s special squad to abide by the rules of engagement and demonstrate professionalism in their conduct every time they are dispatched, saying that they have become the body image.

According to him, they will soon be deployed to various schools across the state.

Abodunrin called on the state government to ensure that safety studies are taught as a course in all schools in Ondo state.

“In Ondo state, we have 1,606 secondary schools that we must protect because bandits have targeted schools by going there to pick up our children and teachers.

“The SFS will be able to take on bullies when they want to attack schools and it will also provide students and teachers with personal safety skills.

On the other hand, RRS will provide a rapid response to emergency or urgent calls throughout the state, ”he said.

Akeredolu pleaded with all state security agencies not to give way to thugs, especially during the Christmas period.

“Ondo state turned out to be one of the safe states in Nigeria and of course this is due to the efforts of the security teams and with this inauguration, we are ready to go to our schools.

“We are ready and willing to support the security teams in the state of Ondo to guarantee lives and property.