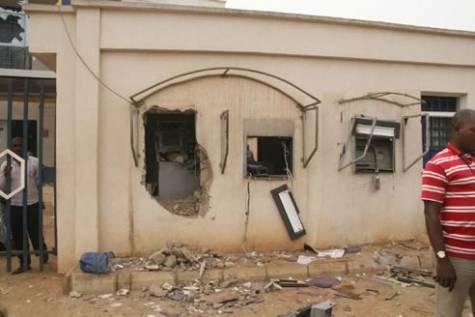 Armed robbers killed a police officer and a special marshal of the Federal Road Safety Corps on Monday in Aramoko-Ekiti when they raided an old-generation bank.

A source who requested anonymity told the Nigerian News Agency that armed robbers broke into the bank via Igede-Ado-Ekiti Road after the job had closed.

According to the source, the armed robbers blew up the main door of the bank’s lobby with explosives believed to be dynamite to gain access.

He added that the armed robbers had previously opened fire on a police officer on duty before blowing up the front door.

“The Special Marshal who was in his private vehicle had no luck either, as he ran into the barricade set up by the armed assailants to prevent access to the area. They shot and killed him as he approached.

“The effect of the dynamite threw the town into chaos because houses and shops in the area were affected,” said the source.

NAN learned that the armed robbers escaped through the newly constructed Erijiyan-Ikogosi Road with their loot after the operation that lasted about 30 minutes.

ASP Sunday Abutu, a police spokesman in Ekiti state, confirmed that two people were killed in the attack.

“It was an attempted robbery, but they were repelled. Our men and officers from the Rapid Response Brigade pursued them and recovered two vehicles that they used for the operation.

“The cop who was killed was outside the bank, while the FRSC Special Marshal was also shot at a distance from the bank.

“The police have taken action and we will make sure we get to the root of this matter,” he said.