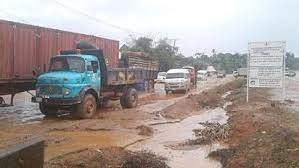 The Independent Petroleum Marketers Association of Nigeria, IPMAN, says the flow of petroleum products in the southeast area is severely hampered by the condition of some interstate roads.

IPMAN chairman, Enugu depot, Chinedu Anyaso, said so in an interview with Nigeria’s news agency in Awka on Friday.

NAN reports that the traffic jam, particularly in the border towns of Anambra, Amansea and Ugwuoba at the end of Enugu, had spread beyond Anambra Government House towards the Arroma junction in Awka.

Anyaso, who was reacting to the traffic jam on the Ugwuoba-Awka stretch of the Enugu-Onitsha highway, said around 250 trucks had been trapped in traffic in the past week.

He said the trucks included trucks loaded with produce heading to Enugu and Ebonyi states, and those scheduled for Anambra, which had traveled to Enugu to enroll in the Petroleum Equalization Fund (PEF). and returned to their points of sale.

The president said those who unloaded their products and were returning to various depots were also trapped.

According to him, if the situation continues for a few more days, many gas stations could run out of products, causing an artificial shortage.

“The poor condition of the Awka-Amsnsea-Ugwuoba road on the Enugu-Onitsha highway has posed a serious challenge to the free movement of goods and services.

“We traders are suffering huge losses; some of our tankers have fallen and need to be transhipped, while many of our drivers have had to sleep on the road for days due to the situation.

“Currently, we have more than 250 trucks, loaded and empty, that are trapped. The danger is that gas stations will run dry, causing prices to rise within the deposit community.

“We call on the federal government and affected state governments to make the necessary repairs to ensure the free flow of vehicles,” he said.

Meanwhile, the Federal Road Safety Corps (FRSC) attributed the situation to failed portions of the road.

“The FRSC, the Anambra sector command, notes with deep concern the chaotic traffic situation in Awka and its surroundings, especially on the Enugu-Onitsha highway.

“The root cause of the problem is the failing part of the road in Amansea, which has made the road impassable for vehicles, especially articulated vehicles.

“This, in turn, created a long queue, with the ebb reaching all the way to the immigration hub. The queue effect, coupled with the impatience characteristic of many road users, led to the roar of traffic.

“We appeal for the patience and understanding of all road users in the state,” she said.