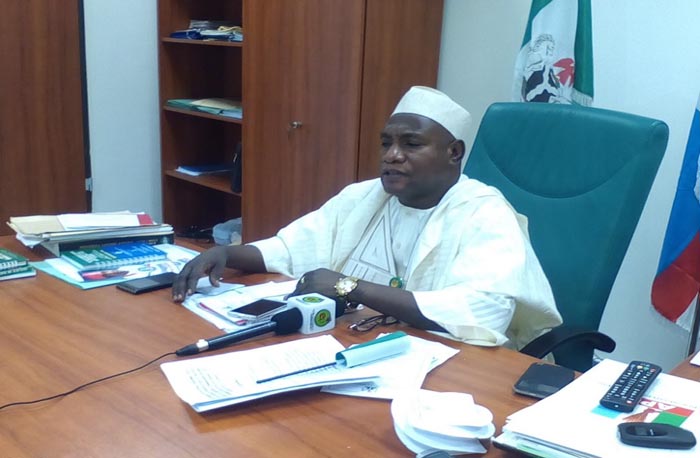 Member of the House of Representatives who represented the Bali / Gassol Federal Constituency of Taraba State, Garba Chede, shouted at President Femi Gbajabiamila‘s alleged refusal to swear him in, despite a court order directing him to do so. to do.

DAILY NIGERIAN reports that the Independent National Electoral Commission, INEC, declared Mubarak Gambo the winner of the Bali / Gassol federal elections in 2019, but the Abuja Federal High Court overturned the victory, declaring Mr. Chede the winner of good faith of the election.

The court also ordered Mr. Gbajabiamila to take the oath to Mr. Chede as a member of the Chamber.

Speaking to reporters in Abuja, the lawmaker lamented that the president had not yet obeyed the court order, alleging that President Muhammadu Buhari’s personal assistant for home affairs, Sarki Abba, was in attendance. origin of his ordeal.

He said: “The Federal High Court has ordered that I be sworn in as a member representing the Federal District of Bali / Gassol, but I have not yet taken the oath. However, the order is the order of mandamus, which means the order charges the President to take the oath of office.

“But when I brought the order I handed it to Mr. President and after reading the order the President said that there is someone called Sarki Abba who is a special advisor for internal affairs to the presidency who has an interest in the current person.

“The SA on Home Affairs also told the President that the current occupier has gone to appeal the judgment and he also said that it is the culture of the House to protect a seated member even if there is has a court order. It is not automatic to have a new member sworn in at this time.

Mr Chede further told reporters that the House’s minority leader and other members persuaded the president to abide by the court order, but to no avail.

“The House Minority Leader, the Hon. Ndidi Elumelu of the People’s Democratic Party (PDP) attacked him and told him to obey the court order. To my surprise, a legislator is so adamant about the court’s decision.

“I am surprised that the President has disobeyed the judgment of the Court and I very much doubt how he will make the law and disobey the law at the same time,” lamented Mr Chede.

Speaking on what to do, he said: “Now we are going back to the courts to ask for another directive. What is surprising is that the president is a lawyer and he knows the implications of what he does. When we talk about court order, we are talking about the law and the law prevails over every individual.

“The story of Sarki Abba, I’m not the only one he told. He has told many people that Sarki Abba in the presidency is interested in the MP illegally occupying my office.

“Of course, the President’s action is enough to give the opposition a chance to take over, because if the President who is our leader in the APC cannot comply with the court’s order, it ‘is total destruction. “

The lawmaker further revealed that the Federation Attorney General wrote to the president on the court’s position, advising him to do what is necessary.

Mr. Chede said: “The Attorney General of the Federation, who is the Federation’s legal advisor, first wrote to him that he had to take the oath to the Hon. Garba Chede and even the legal service of the National Assembly.

“He wrote to Mr. Speaker to take the oath to me. But all he said was I should go get the court order. He changes like a chameleon.

“So my whole fate is now in court for another term. If the President chooses to disobey the court order, let’s see how it goes.

“But, this offense, although I am not a lawyer, can put him in jail. I assure my supporters that we will achieve victory against the will of the President.

The legislator wondered why the President would obey few elements of the executive rather than the judiciary.

“I met the House leader, the Hon. Ado Doguwa on the matter and in my presence, Ado Doguwa sends him a text. He called him and told him that the Hon. Garba is our member and even the other person did not attend the primary, even our Head Boy, Hon. Mutari Betara also helped him take the oath, and he refused.

“In addition, one of our leaders, the Hon. James Faleke told him to abide by the court order he refused and told him that there is one, SA, in the presidency called Sarki Abba who is interested in the guy in the seat and Faleke was surprised. and asked regarding the president’s special assistant with the National Assembly. “