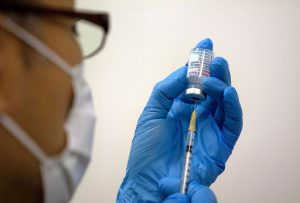 Pharmaceutical Moderna sounded new alarms in financial markets on Tuesday with a warning that existing vaccines against the coronavirus, COVID-19, would be less effective against the Omicron variant than they have been against the Delta variant.

Not far behind is the Australian dollar, which hit a one-year low due to the same comments from Bancel.

“There is no world, I think, where (effectiveness) is at the same level. . . we had with Delta, ”the Moderna boss told the Financial Times.

“I think it will be a material fall. I don’t know how long because we have to wait for the data.

“But all the scientists I’ve talked to. . . they’re like ‘this is not going to be good,’ ”Bancel said.

Moderna did not respond to a Reuters request for comment or say when it expects to have data on the effectiveness of its vaccine from Omicron, which the World Health Organization (WHO) says carries a very high risk of sudden rises in infections.

Bancel had previously said on CNBC that it could take months to start shipping a vaccine designed for the new variant.

The WHO and scientists have also said it could take weeks to understand whether Omicron is likely to cause serious illness or escape protection against vaccine-induced immunity.

If there was a need to change COVID-19 vaccines, new ones could be approved within three to four months, he added.

“Vaccination will probably keep you out of the hospital,” said John Wherry, director of the Penn Institute for Immunology in Philadelphia.

Moderna and her fellow drugmakers BioNTech and Johnson & Johnson are working on vaccines that specifically target Omicron in case existing injections are ineffective against it.

Moderna has also been testing a higher dose of its existing booster.

Uncertainty about the new variant has triggered global alarm, and border closures cast a shadow on the incipient economic recovery from the two-year pandemic.

News of its emergence wiped roughly $ 2 trillion from global stocks on Friday, but calm had returned on Monday.

First detected in southern Africa a week ago, Omicron is known to have spread to more than a dozen countries.

Japan, the world’s third-largest economy, confirmed its first case Tuesday, in a traveler from Namibia.

Australia discovered that a person with Omicron had visited a busy shopping center in Sydney when it was likely contagious.

Countries around the world have tightened border controls in a bid to prevent a repeat of the strict closures and sharp economic recessions of the past year.

Britain and the United States have boosted their reinforcement programs.

England also made masks mandatory once again on Tuesday in stores and on public transport. International arrivals will have to self-isolate themselves until they have a negative PCR test for viral DNA.

Australia has delayed the reopening of its international borders by two weeks, less than 36 hours before qualified foreign and migrant students were allowed to return.

In a boost to the authorities, the Constitutional Court ruled that previous closure measures had not violated children’s rights to school or other protected freedoms.