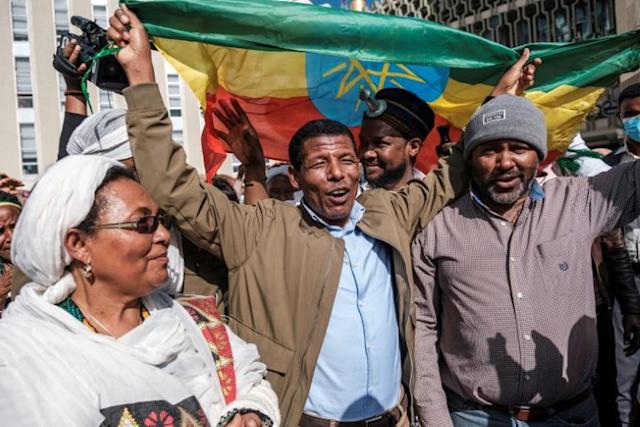 Ethiopian Prime Minister Abiy Ahmed said his soldiers would “destroy” rebels in the northern region of Tigray, in the latest installment of state media images allegedly showing him on the front lines.

“You are destroying the enemy comprehensively, there is no going back without winning,” Abiy, the 2019 Nobel Peace Prize winner, said in the 34-minute clip posted on his office’s Twitter page on Saturday.

“We will win, the enemy is dispersing, there are areas that we have to control,” he added.

“Until we destroy the enemy there is no rest.”

Abiy announced this week that he would begin leading operations against the Tigray People’s Liberation Front (TPLF), which once dominated national politics but has been embroiled in a gruesome war with his government for the past year.

The announcement has spurred new hires in Addis Ababa.

The country’s most famous distance runner, Haile Gebreselassie, told AFP that he was determined to “sacrifice himself and defend Ethiopia.”

The TPLF, he added, “is destabilizing our country beyond its region.”

On Wednesday, state-affiliated media outlets announced that Abiy had handed over the usual duties to his deputy.

His move came after the TPLF reported significant territorial gains, claiming this week to have seized a city just 220 kilometers (135 miles) from the capital Addis Ababa.

The TPLF has aligned itself with other armed groups, including the Oromo Liberation Army, which is active in the Oromia region surrounding the city.

On Friday, state media showed what they described as the first images of Abiy, a former lieutenant colonel, in uniform at the front, including an interview in which he promised to “bury the enemy.”

He also said that the army had secured control of Kassagita and planned to retake the Chifra district and the city of Burka in the Afar region, which borders Tigray, the stronghold of the TPLF.

Independent media have been largely denied access to war-affected regions in recent weeks.

– Visiting Troops – On Saturday, officials in Addis Ababa held a ceremony for athletes and artists heading north to visit troops.

Among those who say they will fight is Feyisa Lilesa, a distance runner and Olympic silver medalist.

War broke out in early November 2020 when Abiy deployed troops to Tigray to overthrow the TPLF, a move he said came in response to TPLF attacks on army camps.

While promising a quick victory, by the end of June the TPLF had regrouped and retaken most of Tigray, and has since advanced into the neighboring regions of Amhara and Afar.

The African Union’s special envoy for the Horn of Africa, Olusegun Obasanjo, is leading a diplomatic push for a ceasefire, but so far there have been few signs of progress.

International alarm is growing over a possible rebel assault on the capital, with the United States, the United Kingdom, Germany and Italy on the list of countries urging their citizens to leave Ethiopia.

France joined the group this week and on Sunday plans to transport some citizens on a charter flight.

The government insists the rebels’ achievements are exaggerated, blaming what it describes as sensational media coverage and scaremongering embassy security advisories for creating panic.