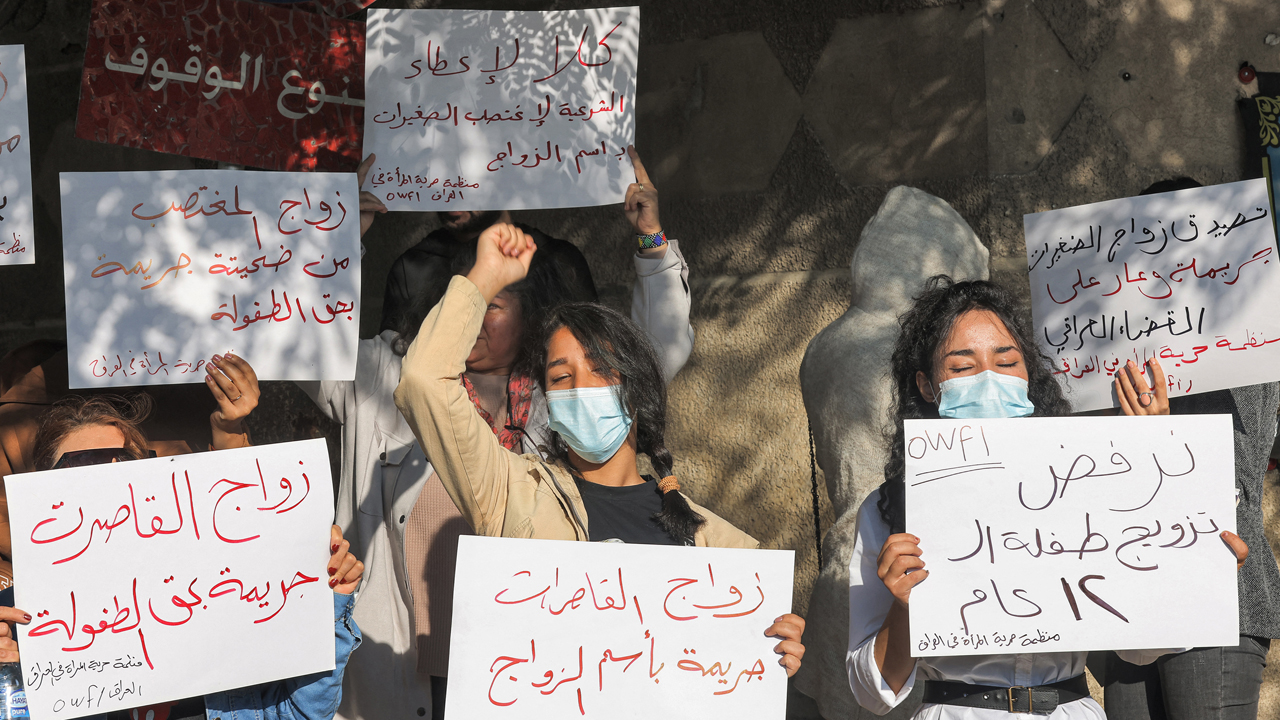 A court has resumed hearing a case in which a judge was asked to formalize a religious wedding between a 12-year–old girl and a 25-year-old man, raising concern across Iraq.

The court, located in Baghdad’s Kadhamiya district, adjourned the case last week, when protesters gathered in front of the court, chanting and holding placards with slogans such as: “Child marriage is a crime against children” and “No to child marriage “. .

“Children should be at home watching cartoons, not married,” said a protester outside the courthouse last week.

The case was first highlighted when the girl’s mother in a video asked authorities to save her daughter. The mother told local media that her 12-year-old daughter had been raped and forced to marry her stepfather’s brother.

However, a department of the Interior Ministry that deals with violence against women said in a statement after meeting the girl, her father and her husband that it was assured that they had not forced her to marry.

“Whatever happens, a marriage between a 12-year-old girl and a 25-year-old man is simply not acceptable,” Hala, an advocate for the rights of women and children in Iraq, told Al Jazeera.

The law in Iraq states that the legal age for marriage is 18, but that it could be lowered to 15 in “urgent” cases if the father of the person in question consents to the marriage.

The Convention on the Elimination of All Forms of Discrimination Against Women (CEDAW), a universal legal document intended to protect the rights of women, also establishes that marriage under the age of 18 is a form of forced marriage.

However, despite legal provisions, child marriage is widespread in Iraq, especially in rural areas and other countries in the region. Poverty and religious practices led many parents to marry off their young daughters in hopes of easing the burden on the family or providing financial support.

According to the Multiple Indicator Cluster Surveys (MICS) conducted by the Iraqi government and released in 2018, 7.2% of married women ages 20-24 were married for the first time before their 15th birthday, and another 20.2% were married before the age. 18.

“Child marriage is a violation of human rights, compromises the development of girls and often results in early pregnancy and social isolation, with little education and poor professional training that reinforces the gendered nature of poverty,” UNICEF said. , a participant in the survey.

Despite the furor surrounding this case, many other girls do not enjoy the same level of care, according to legal professionals.

“This case receives special attention from the media because the girl’s mother took to social media and sparked a discussion across the country.

“However, there are thousands of cases that have gone unnoticed by the media, and many of those marriages took place without much notification or conviction,” Baghdad lawyer Mariam Albawab told Al Jazeera.

Save the Children, an international NGO, has called for the minimum age for marriage to be at least 18 and for exceptions to this rule to be removed.

Related Topics:Elimination of All Forms of Discrimination Against Women (CEDAW)IraqMultiple Indicator Cluster Surveys (MICS)NGOUNICEF
Up Next