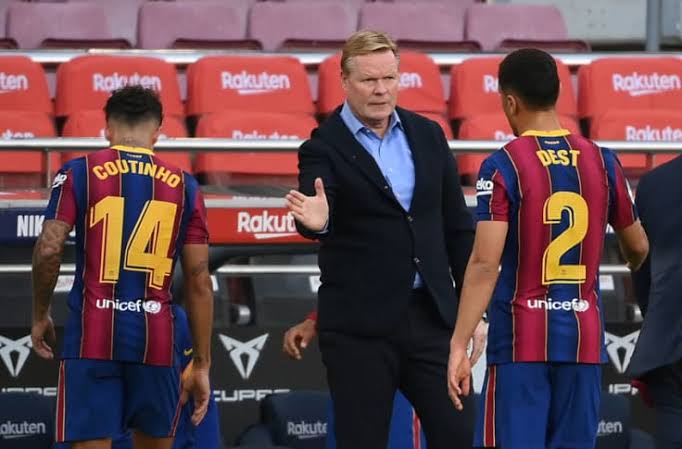 After Koeman left, sources told Reuters the club would open talks with Xavi Hernandez over the vacant position on Friday, with the former team captain now the first choice.

However, the same sources added that FC Barcelona did not expect to have a replacement before the international break in November.

An interim coach is expected to take charge of the next three games against Alaves, Dynamo Kiev and Celta Vigo.

Koeman’s position had been seriously weakened after poor results ahead of the October international break, with back-to-back losses to Real Madrid and Rayo this week proving to be the tipping point.

The 58-year-old leaves FC Barcelona in ninth place in the league and risks missing the UEFA Champions League knockout stage for the first time in 20 years.

Barca have yet to record any away wins in any competition this season.

The club said in a statement: “FC Barcelona have relieved Ronald Koeman of his duties as coach of the first team.

“Club president Joan Laporta informed him of the decision after the loss to Rayo Vallecano.

“Koeman will say his farewell to the team on Thursday at the Ciutat Esportiva.

“FC Barcelona would like to thank him for his service to the club and wish him the best in his professional career.”

As for Xavi, the 41-year-old former midfielder won numerous trophies with FC Barcelona during his 17 years as a senior player.

He then joined Al Sadd in 2015, becoming the head coach of the Qatari club after hanging up his boots in 2019.

This is his only managerial experience to date.

Along with Xavi, sources previously told Reuters that Belgium boss Roberto Martinez was among the candidates.

Laporta initially considered sacking Koeman this summer and even told him he needed two weeks to try and find a new manager.

In the end, for lack of credible alternatives, Laporta decided to stick with Koeman.

However, sources said former Dutch boss Koeman was upset by Laporta’s actions and the relationship between the two has never been the same since.

Despite this, Laporta granted Koeman a reprieve last month after the 3-0 UEFA Champions League loss to Benfica in Lisbon.

Since then, however, FC Barcelona have lost to Atletico Madrid, Real Madrid and now Rayo Vallecano in the league.

“[Being ninth in LaLiga] is not good, ”Koeman said after striker Radamel Falcao’s goal sentenced FC Barcelona to defeat at Vallecas on Wednesday, with Memphis Depay missing a penalty.

“It shows that the level of the team has dropped, in terms of balance in the team. We lost players with great efficiency in the last third.

“I think in recent years the teams at the top have strengthened and we have not been able. It counts.

“But not today, because despite the missing players, we played well. But you can’t say that when you’re not scoring, not in Spain.

When asked if the outcome put his job at risk, hours before his dismissal, Koeman replied, “I don’t know.”

He replaced Quique Setien after FC Barcelona’s 8-2 loss to Bayern Munich in the UEFA Champions League in August 2020.

He left his job in the Netherlands, paying the Dutch Football Association allowance out of his own pocket, to take on what he said was his “dream job”.

In his first and only full season in charge, he led FC Barcelona to the Copa del Rey and to a third place in La Liga.

Paris Saint-Germain (PSG) eliminated them in the round of 16 of the UEFA Champions League.

Koeman scored the winning goal in the 1992 European Cup final as a player for FC Barcelona.

This has earned him legendary status at the club, but he saw his time on the Camp Nou bench plagued with problems on and off the pitch.

Long-term injuries of Ansu Fati, Ousmane Dembele, Philippe Coutinho and Sergio Aguero, among others, have hampered his squad selections.

The club also had to drastically cut payrolls during his tenure to deal with his financial woes.

Luis Suarez, Arturo Vidal and Ivan Rakitic all left after the 8-2 setback to Bayern Munich, with Lionel Messi and Antoine Griezmann following them through the exit door this summer.

He said the Argentina international has covered up many of the squad’s flaws and is responsible for making the players around him even better.

In terms of replacement, Koeman’s hands are tied as the club’s debt has reached around € 1.4 billion.

All the entrants this summer, such as Memphis and Aguero, have been signed on free transfers and Koeman has turned to the youngsters instead.

Ronald Araujo, Oscar Mingueza and Pedri all broke through last season, while Alejandro Balde, Gavi, Nico Gonzalez and Yusuf Demir have all had chances so far this quarter.

Since his retirement in 1997, Koeman has coached in the Netherlands, Portugal, England and Spain with varying levels of success.

He won two Dutch titles with Ajax Amsterdam and did a good job at Southampton, but left Valencia and Everton after failing to live up to expectations. Reuters / NAN

Italy agrees on new measures to speed up economic recovery